Hewing a fresh cut tree was one of the most labor intensive and artistic aspects of construction back in the 1800’s and before. Not only was the tree felled by hand, but the log was then squared up by hand as well. As an ancient method of conversion, different methods of each step in hewing have developed in history. Below explains an old method of hewing that very few know about and understand to this day.

After a tree is selected and felled, hewing can take place where the log landed or be skidded or twitched (skidded with a horse or oxen) out of the woods to a work site. The log is placed across two other smaller logs near the ground or up on trestles about waist height; stabilized either by notching the support logs, or using a ‘timber dog’ (also called a log dog[2], a long bar of iron with a tooth on either end that jams into the logs and prevents movement). The hewer measures and locates the timber within the log on both ends and marks lines along the length of a log, usually with a chalk line.

The next step is to chop notches every foot or two, almost as deep as the marked line using a chopping or scoring axe, called scoring. At least three methods are used in scoring. 1) Standing on the log and swinging an axe to chop the score; 2) In Germany a method of two carpenters standing on the ground with the log on trestles and swinging downward to slice the scores. (see video in link below); 3) A modern method of using a chain saw saves labor and time.

The pieces of wood between the notches are knocked off with an axe , this process called juggling or joggling. This results in a rough surface pared down just shy of the marked line. Scoring and juggling remove a fair amount of wood, make hewing easier and prevent long shreds of wood being torn off.

Hewing is the last step in this whole process, which is also collectively referred to as hewing. Hewing is done on the logs sides with a broadaxe. Hewing occurs from the bottom of the stem upwards towards what was the top of the standing tree, reducing the tendency of the broken fibers to migrate inwards towards the eventual beam.

It is widely published that an adze was used to hew the top surface of a log flat in the same manner as an axe is used on the sides of a log. However, physical evidence of looking at the marks left by the hewing tools in historic buildings, called tracology, are swung in an arc and thus made by an axe, not an adz. Shipbuilders frequently used adzes in shaping ship timbers, the choice of tool being made by the position of the surface being hewn, the sides best hewn with an axe and the face best hewn with an adze. Historic illustrations do show some Asian carpenters hewing building timbers with an adz. Further smoothing can then be done using a hand plane, drawknife, yariganna (an ancient Japanese cutting tool) or any other established or improvised means. Some 19th century timber buildings in the U.S. have hewn long timbers in the same framing with vertically sawn and the later technology of circular sawn timbers. The reason for this is the long timbers were easier to hew with an axe than to take to a sawmill due to poor transportation routes.

That is a lot of swings to create one hand hewn beam! That many swings is why we take great pride in preserving the history and craftsmanship that went into these beams some 100-200 years ago.

Get started on your project today! 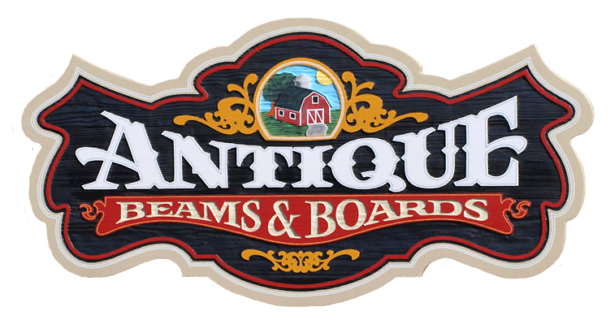 Enter your information below to join our mailing list to receive the latest news and updates from Antique Beams & Boards! We'll send you information about current materials in-stock, preferred and recommended project inspiration and ideas, along with additional information on how to order! Your next reclaimed wood project is just a step away!

Thank you for subscribing to Antique Beams & Boards! Watch for our newsletter for project inspiration, reclaimed materials in stock, along with specialty bulk items! Contact us today if you have questions at info@antiquebeamsandboards.com!

We will never send you malicious emails or use your email address for unwanted purposes.